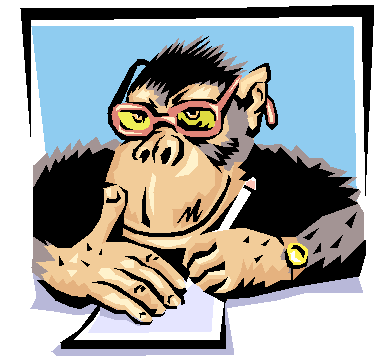 A Poem By Jim Hill

One day my teacher told me that my daddy really just came from an ape.

“Mam, is that why your daddy bears an uncanny resemblance to one from Planet of the Apes?”

Hanging by the nape, I had little chance of escape.

Thinking, “Isn’t this how mommy affected her brave cubs escape?”

“While daddy was out in the jungle, collecting savory dates?”

“Principal, why am I suddenly the subject of your extreme scorn, rage, and hate?”

“Scientific facts are the reason she went into such a state.”

“Would have been worse, except her highly-evolved, motherly senses are innate.”

“Not for that, she’d have had you on the rack, and been justified in her attack!”

Rubbing my neck, “Sir, could it be that your birth was the result of a rape?”

“While your daddy was hunting, out looking for a date?”

I have often said that evolution is a religion which requires more faith than Christianity. Christianity is historic and evidential, whereas evolution requires giant leaps of faith that would have to clear the largest mountain in a single stride.  It seems that evolution is no longer taught as a theory, but pure fact. It is the foundation upon which much of modern biological theory rests. Evolution requires that literally quadrillions of simultaneous events happened at the very same time.  Animals had to evolve from something and their food sources at the same time. The dirt on which they stand had to “evolve” from a great cosmic explosion. Yet all of it is based upon the idea that a genetic mutation prospered the evolutionary line. When is the last time we saw mutations improving things?  Does a two headed frog hunt better than one with a single head? They should be able to catch twice as many bugs, but then why didn’t this mutation become dominant?  Breast cancer is a mutation, and does that improve the human race?  The idea that genetic mutations improve anything is ridiculous, as is the idea that man evolved from an ape.

According to evolutionary teaching, humans are the most highly evolved creatures in the world.  Okay, their instincts and intelligence shoud be written in their genes, and therefore their genetic makeup should be the most complex among any plant or animal.  If you believe this you would be wrong.  Wheat has one of the most complex genetic structures of any plant or animal. In fact some varieties has as many as six sets of chromosomes.  So tell me Mr. Wheat, what should I wear to the prom this Saturday night?  I’m thinking about renting a tux, but would I be overdressed in comparison to Sally my date whose mom made her dress out of an expensive table cloth?  I could use some help in other areas too, perhaps I should ask Bran your sister for some help? Can you send her over tomorrow at 2?

This site uses Akismet to reduce spam. Learn how your comment data is processed.

Login to Christians for Christ Ministries
Reset Password
Enter the username or e-mail you used in your profile. A password reset link will be sent to you by email.